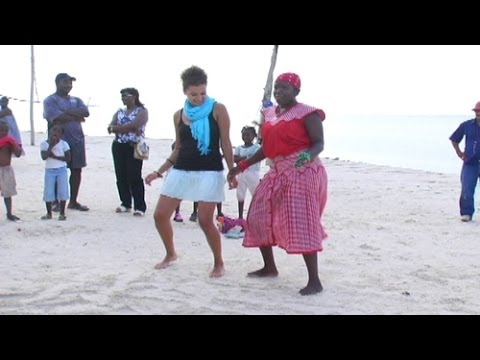 In an effort to see the rest of the island, I rented a moped and I’m driving east. If you are traveling with more than just yourself you can rent a car or take a taxi tour.

I’m taking Roatan’s main highway, the paved two-lane road that winds along West Bay Ridge and runs down the center of the island.

When driving on Roatan you must be careful, taxis regularly stop in the middle of the road to pick up passengers, locals walk and bike right on the pavement and you may run into grazing cattle or horses.

Oakridge is a small town on the southeast shore of Roatan it has about 5000 inhabitants most of whom are of English descent.

Oak Ridge’s existence is directly linked with the harbor, historically it was a refuge for pirate ships on the run from Spanish warships. After that, it was the center of Roatan’s boat building industry and now serves as home to a fishing fleet and a processing plant.

While many people do not take the time to visit Oak Ridge it is really worth stopping by, the locals are welcoming and friendly, it has several lesser-known dive sites and an extensive mangrove forest which I’m going to tour by boat.

According to legend the world-famous pirate Henry Morgan spent a little time on Roatan while he was here he and his crew used the mangrove forests of Oak Ridge as a hiding place for their ships.

The mangroves are an important part of any island’s coastal environment they protect the fragile coastline from rough seas and storms and their root systems both above and below the water protect breeding fish crustaceans and other marine species.

The water looks very dark but I’m told it’s due to a substance called tannin which the bark of the mangrove secretes.

So I’m told that this passage right here is where Captain Morgan and his crew cut through the mangrove forest so they can hide out and wait for the unsuspecting voyagers, so they can go out there and loot their ships.

When looking for information about Roatan’s history you may find it difficult to get a complete picture. What is clear however is that Roatan’s history is directly connected to its ports and with the history of slavery.

In 1502 on his fourth voyage to the New World Christopher Columbus discovered the Bay Islands and claimed them for Spain.

Over the next several years Roatan would be caught between Spanish conquistadors and British soldiers each trying to claim the island as their own. During this time the majority of locals inhabitants were taken off the island and forced into slavery.

On February 25th, 1797 English soldiers relocated 3,000 black Carib Indians from Saint Vincent to Roatan, repopulating the island, many of these Caribs now known as the Garifuna migrated to other Central American countries.

However, Roatan’s town of Punta Gorda has remained the first home of the Garifuna.

I’ve set up a tour of Punta Gorda with a local guide in hopes of learning more about the Garifuna, Carmen is going to show me around town and introduce me to a local family.

Thank you so much.

Great to have you coming to visit us.

So great to be here, so what are we going to do?

Let’s walk to meet some friends and some families. Okay.

Probably you can have some dinner or something.

He boiled green plantains now he is going to mash it with this.

So what is the dish called that you’re making?

It called Machuca because it’s mashing.

Oh, you got to do it with strength Ila.
Alright, it’s hard.

You know this is, this is therapy.

These are maracas and the dancers use them. We’re going to go and see the dancers shortly and learn the punta hopefully. I heard it’s hard but I’m hoping to try it.

Another programming update complete another one ready to go! We would like to welcome the Roatan Local Market and Centro Medico Ramos to the Roatan...

We hope everyone had an enjoyable Christmas and New Year and we would like to wish everyone all the best for 2021. As the Roatan tourism industry...

Lawson’s Market and Delicatessen, Roatan A great spot to stop for breakfast, lunch or to pick up some groceries for your vacation in Roatan...

Richardson Serenity Villa Located just outside of West End, this new hotel property offers a special location where you can relax and unwind. The...